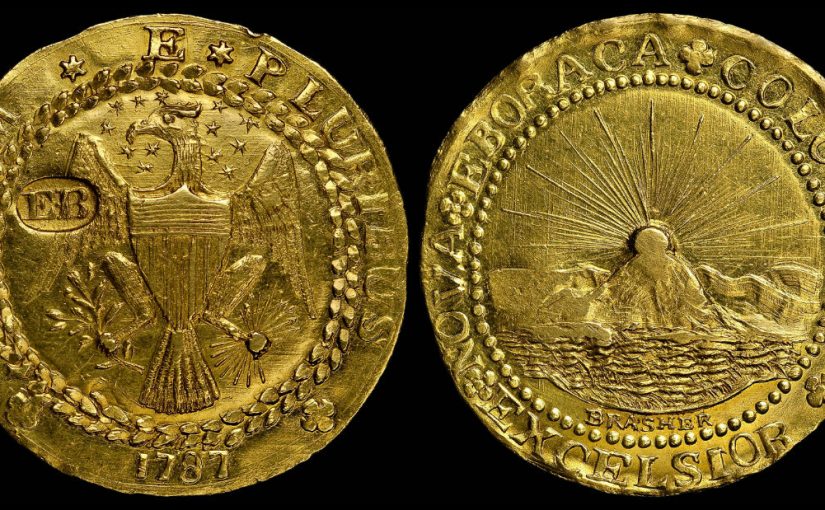 Ephraim Brasher was the one who crafted the Brasher Doubloon Gold Coins. These are one of the extremely rare coins ever minted in the US. Arguably, many collectors, coin enthusiasts, and dealers have mixed opinions about Ephriam Brasher’s Gold Coins. There are lots of private gold coin enthusiasts believes this was the first Gold Coin privately minted in the US. Some people, however, believe otherwise.

Some say that the Brasher Gold Coins which were struck in 1787 were indeed gold coins but were meant to be patterns of proposed copper coins in the country. Even if there were very minimal evidence that will support either claim, the Brasher Doubloon Gold Coins are indeed a spectacular, privately minted coins with extreme rarity and unbelievably expensive value.

Did you know that the Brasher Doubloon Gold Coin inspired a movie and a novel? The novel was called The High Window was written by Raymond Chandler in 1942. The 1947 movie titled “The Brasher Doubloon” was based on the said novel.

Anyone who gets to see this gorgeous coin will have a once in a lifetime encounter with more than a two-century-old history. Why? Because the Brasher Doubloon coins are considered one of the most valuable coins there is in the whole world.

The History of the Brasher Doubloon Gold Coins

Ephriam Brasher was of Dutch ancestry who was born in 1744 and died in 1797. He was a gold and silversmith as well as a jeweler by profession. It was said that his last name was often mispronounced, but one of his descendants claimed that the correct pronunciation would be “BRAY’-sher.”

The first US coins used as a legal tender were only minted 16  years after the Declaration of Independence in the year 1792. Before this, people used Spanish coins for trade and commerce. Ephriam Brasher created the Brasher Doubloons in 1787.

He was known to be a neighbor of George Washington in 1790 when he resided in Cherry Street in New York. Some claims that a Brasher receipt addressed to the Washington household is evidence that he and Washington had a direct connection with the US’ first coinage. The receipt claims brasher was able to sell “sundry articles of plate” amounting to 283 pounds, 3 shillings and 3 pence. No such plate was ever found in the possession of the Washingtons. However, many believe these used to mint the first ever dimes and half dimes in the year 1792.

In the year 1787, Brasher, along with John Baily made a petition to the state. They wanted a contract that will enable them to create copper coins for the state. However, it was declined after a legislature committee investigated and recommended that the petition is postponed for an unspecified time. Brasher did not want to give, so he devised a plan and put it into action.

To promote and stimulate his proposed coins, he actually issued his own gold coins, now famously known as the Brasher Doubloon Gold Coins. His gold coin was known as a Spanish specimen (the style he used was a copy of the 1742 Lima Doubloons) weighed approximately 39.4 grams or about 408 grains. This is the reasons why Brasher’s gold coins were called as Doubloons. Some argue that the coin’s worth were about $16 each at the time of issuance.

Since Brasher made the Doubloons for the purpose of stimulating his coinage proposal, they were not accepted for coinage. However, he struck these gold coins to have the pattern of a New York Coin. It was hard not to call them coins when they looked like one.

Brasher was also a civic leader. He had served as a Coroner, Assistant Justice, Election Inspector, Sanitary Commissioner and Commissioner of Excise. Not only that, but he was also a Lieutenant during the Revolutionary War in New York.

Brasher and David Ott managed to land a job in the US Mint in 1792. Their job was to assess, scrutinize and report the value of different gold coins of foreign origin in circulation. It was believed that during his days in the US Mint that Brasher issued two other Doubloons.

The American Numismatic Society’s Committee evaluated a variety of Brasher’s Doubloon in the year 1915. The ANSC first concluded that the Spanish American Doubloon – also known as the Lima Style Doubloon was indeed produced on a private mint that was managed by Ephraim Brasher.

They described the Lima Style Doubloon as an imitation of the Peruvian Doubloons that were issued and used in circulation sometime in the 18th century. They were counterstamped by Brasher himself and were struck similarly to the dies used in Lima, Peru. The Lima Style Doubloon Gold coin was said to appear first in the Waldo Newcomer Collection. John Work Garrett purchased the coins who later passed it to the Johns Hopkins University. It is believed that these were struck in 1792 and that there is only two specimen known of this Doubloon.

Another specimen known of the Doubloon is the Half Doubloon. These were struck on small, plain metal disks with half the weight of the original Brasher Doubloon. On first glance, the coins look like it has been clipped on the edges, but according to Walter Breen, the author of the Complete Encyclopedia of the United States and Colonial Coins, the edges were normal and gold metals was not removed. The planchet was just made thinner. This was put up for sale by David Proskey, a numismatist in 1928, and were kept in the Josiah K. Lily Collection of the Smithsonian Institution.

As expected, there were some who were doubtful about the origins of both the Half Doubloon and the Lima Style Doubloon. Because of their backdating, strikes and the like are still a mystery, many have questioned these two specimens.

The design of Brasher’s gold coin was a symbolic one. On the obverse, an eagle facing left can be seen in the center. The eagle’s right talon is clutching olive branch while the left talon holds a bundle of arrows – symbolizing the US is ready for war but it wants peace. The eagle’s head is surrounded by a total number of 13 stars, while the entirety of the eagle was enclosed by a wreath. Written outside the wreath is the legend *E PLURIBUS* UNUM.

The reverse has sun rising over the mountains and has a river beneath it in the center of the coin. This symbolizes “a new beginning.” The scene is surrounded by a series of dots that forms a ring around it. The legend NOVA EBORACA COLUMBIA EXCELSIOR were written outside the ring of dots. The Spanish legend meant “New York and America: Ever Upward.”

Brasher was known to put his hallmark in various foreign gold coins and silverware that managed to pass on his possession. He used at least five hallmarks – two of them are “EB” being the most famous and one he used in the Brasher Doubloon Gold Coin and the EE.B. & Co.

The Brasher Gold Coins according to the PCGS Coin Facts

In the year 1960s, copies of the Gold Doubloons made by Brasher were created by a firm in Massachusetts in Platinum and Silver. During that time, it was believed that those struck in Platinum were sold for $500. However, no one knows if any were sold.

There are lots of replicas of the Brasher Doubloons minted from Brass. Like any rare and well-known American coinage, there are thousands out there being circulated in public. Only a handful as considered worthy, but the rest are just not worth the cash.

Alfred Robinson of Connecticut made a copy of the Brasher Doubloons in the year 1861 struck in Copper and Brass. He struck 25 in Copper and another 25 in Brass. These are examples of the genuine contemporary gold coin. These imitations have larger letters and have a style different from the original. If you’re not careful, you may fall into the trap of buying a fake one and losing your hard earned cash.

In 2014, Brasher Doubloons were produced and sold at the ANA of the American Numismatics Associations at the World’s Fair of Money. Each replica will weigh approximately 0.85 ounces of .999 fine gold. The value of each gold coin was about $1,130. The sale’s price, of course, was much higher. These were minted by Master Engraver Ron Landis (also the founder of the Eureka Mint) using a hand-operated screw press. The reproductions of the Brasher Doubloon were called “Novodels” weighs the same 26.4 grams but the color is a solid pure .000 fine gold. The obverse will still bear Brasher’s initials (EB), but on the reverse, Brasher’s full last name was included.

It was said that there are only about seven genuine Brasher Doubloons, and the rest are just plain imitations. Some of the genuine examples are known to be in the possession of The Yale University, Johns Hopkins University, American Numismatic Society, Smithsonian Institution. The remaining three were under the possession of private individuals. It was believed that the last 7 Brasher Doubloons were dug up in  1838-1897 in a sewer in Philadelphia.

The Walter Perschke Doubloons was noted as the world’s finest. The said gold coin was never out at an auction for 57 years. It was bought by Walter Perschke in 1979. A world record was in order when he paid a whopping $430,000 for it. It surely made headlines all over the world. Its owner, Perschke sold it in an auction after keeping it for 35 years where it was bought for $4.59 million. He was disappointed, to say the least. A coin as rare as his Brasher Doubloon Gold coin was only sold about half his expected amount of 8 to 10 million dollars. Needless to say, it was sold for more than 10 times the amount he paid for it. He died on May 20, 2016, of cancer at the age of 77.

Brasher Doubloons were made with an estimate of $15 worth of gold, and was sold for $16 per piece back in the days. As expected from the very first Gold Coin ever issued in the US, the Brasher Doubloons costs hundreds of thousands of dollars.

The image used by Brasher was believed to symbolize that the US always wanted peace and a peaceful relationship with other countries but will always have the will and power to fight whenever necessary. This adds to the coin’s beauty and has been used ever since in the American coinage.