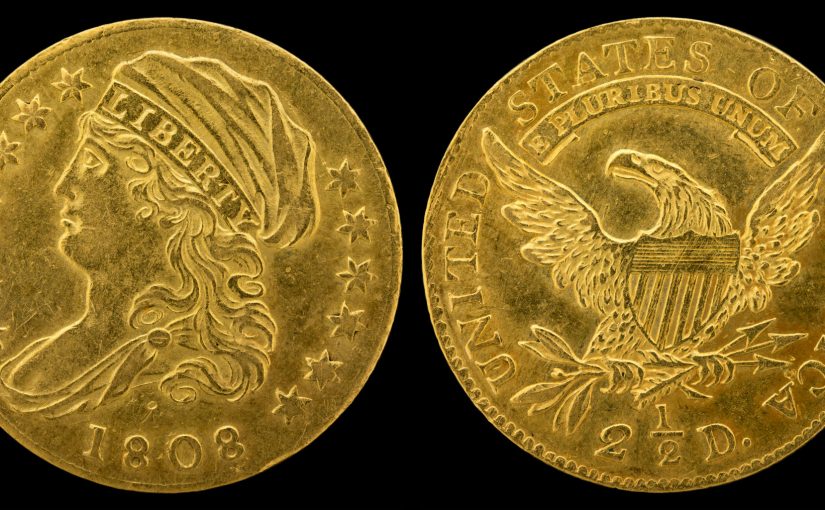 By the year 1807, US Mint Director Robert Pattinson wrote a letter to then-President Thomas Jefferson in order to promote John Reich as Robert Scot’s assistant. Pattinson was worried that Scot might die anytime soon, leaving the position vulnerable with no one properly trained to take the post. After some time, Reich was tasked to create new designs for the US coins.

For the new Quarter Eagle, Reich created a design wherein Miss Liberty is now facing left while a mob cap is seen on top of her head and the legend LIBERTY inscribed on it. 7 stars are in a form of an arc on the left side of the obverse while 6 are on the right.

For the reverse, the Heraldic Eagle is still featured but now has a more naturalistic bird with the Great Seal on its chest. The Eagle is now perched on an olive branch while it is clutching three arrows with its talons. E PLURIBUS UNUM is inscribed on a ribbon placed just above the Eagle. UNITED STATES OF AMERICA is in a form of an arc almost touching the margin while the denomination 2 ½ D lies below the Eagle. Due to the elements being sunk in the die incompletely, most coins have weak borders.

The first type was only minted in the year 1808 with no Proofs. No clear reason was recorded as to why this type only lasted the same year it started, and as a result, it came to be one of the most sought-after US coins. It has a diameter of 20mm which will later change in the following years.

The second type now features a smaller cap on Miss Liberty’s head and the stars surround her profile bust to form a perfect semi-circle. A new die was introduced which resulted in a slightly smaller in diameter. From 20mm, the diameter went down to 18.50mm. The mintages were minuscule since the number of coins produced only depended on the demand. The Type 2 Capped Bust was minted in 1821, 1824, 1825, 1826 and 1827 with only 1 proof date – 1821.

The third and last Type of the Capped Bust $2.5 was created with a beaded border while inside a raised rim. Letters and stars were struck in a slightly smaller size. These were minted from 1829-1834 with 2 Proof.

When it comes to Capped Bust $2.5, the rarest one of them all is the last series minted – those dated in 1834. Considering the low mintages, the bullion value of gold coins rose more than its face value resulting in many gold coins including the Capped Bust $2.5 be melted or sold. The 1808 Capped Bust is considered as the most sought-after in US numismatics.